Each of the two presentations was 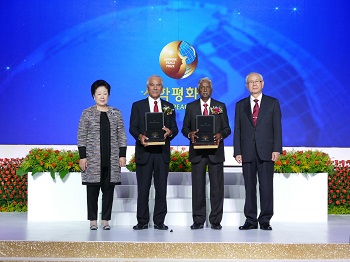 followed by remarks offered by a distinguished commentator. Hon. Erna Hennicot-Schoepges, the former president of Parliament, Luxembourg, served as the moderator for the session, which took place on August 28, 2015, in the InterContinental Grand Seoul Parnas hotel.

H.E. Anote Tong, president, Kiribati, said: “Climate change is the biggest security threat facing mankind.” He described the current era as a critical turning point. “Should we continue on without due consideration to the consequences of our blind pursuit of profits and short development gains, we risk irreparable damages to this our planet, our one and only home.” Kiribati is an island nation in the central Pacific Ocean with a population of 103,000. Most of the population lives on islands barely 10 feet above sea level. “Any high tide coupled with strong winds wreaks havoc to our islands, our homes, our villages. In some parts of the country whole villages have had to be relocated due to severe coastal erosion. Food crops have been destroyed and the fresh water lens [source of drinking water] has been contaminated by the intruding sea water.” With climate changes and extreme weather patterns, low-lying island nations such as Tuvalu, Tonga, Maldives and Marshall Islands are literally on “the frontline of (a) major calamity.” 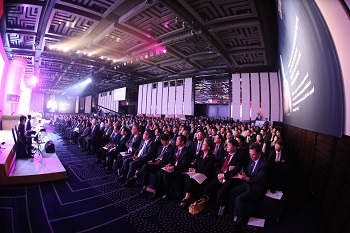 The president said there is a “moral obligation to do what must be done, individually and collectively, to ensure the survival of our planet, our one and only home.” He issued a plea to the international community for financial and technical assistance. The president described several options and strategies, such as floating islands (like a giant offshore oil platform), building seawalls, and finally, relocating residents to other Pacific nations. “The challenge of climate change demands that we must think outside the bounds of convention, outside of our comfort zones, because these are extraordinary challenges and will definitely call for extraordinary and unconventional solutions!”
The president said he has taken steps to deal with climate change, including a “moratorium on new coal mines and the extension of existing coal mines.” In conclusion, the president said that climate change, in particular, the rise in sea level, “threatens our very existence.” Action is required, not by only one nation but by the entire global community.

The commentator, Hon. Siaosi Sovaleni, deputy prime minister, Tonga, said: “The problems of climate change that President Tong has articulated so well are not confined to the isolated island nations in the South Pacific so far away from many of your countries and far from the headlines that dominate most newspapers; the problems of climate change, as President Tong rightfully says, represent ‘the largest moral challenge of the 21st century.’” The causes of climate change are generally divided into two categories: human and natural, he said. Although Mother Nature can’t be controlled, how individuals and nations interact with the environment can be changed, particularly with regards to greenhouse gases in the atmosphere. The deputy prime minister is from Tonga, an island nation facing similar challenges as Kiribati. According to scientific estimates, many of the low-lying islands may “disappear into the sea by the year 2050 as a result of rising sea levels due to the rise of global temperatures.” The deputy prime minister said: “Governments all over the world must take steps to formulate policies that discourage environmental damage. Individuals must make choices which contribute to reducing the emission of greenhouse gases.” He thanked President Tong for his “noble efforts to save [his] nation and to stand as an example for all of us to live for the sake of others.”

Dr. Modadugu Vijay Gupta, fisheries scientist, India, spoke about food security, global peace and the role of small-scale farmers in building a more peaceful world. The Millennium Development Goals established by the United Nations in 2000 include the eradication of poverty and hunger. Dr. Gupta outlined what the situation may look like in the future. Currently the global population is more than 7 billion. It is expected to reach 9 billion by the year 2050. “It has been estimated by the Food and Agriculture Organization of the U.N. that to meet the demand of the increasing population, we need to increase food production by 60 percent globally, and by 90 to 100 percent in developing countries.” The question is asked: Can food production be increased when resources are depleting? As a result of global warming, climate change will increase the frequency of droughts and floods. There is a growing agreement that the benefits of the green revolution are diminishing. Dr. Gupta said, “If we are not able to meet the projected demand for food, the consequences will be increased poverty and malnutrition in developing countries, leading to political unrest.

Food security is linked to poverty. Even in those countries where there is enough food produced, there is still hunger and undernourishment. According to the World Bank, “the high price of food and energy is leading to potentially serious tensions and social unrest in at least 33 developing countries, where many families are forced to spend half to three-quarters of their income on food [while in the developed world this figure is less than 15 percent].” Dr. Gupta has been developing fish farming or aquaculture for the past five decades. He pointed out that “fish are a rich source of protein, essential fatty acids, vitamins, minerals and a major source of animal protein to people in the developing countries.” He credited Dr. Sun Myung Moon for “rightly identifying the potential of oceans and other aquatic systems as a major source for contributing to food security and peace.” Since the 1970s, Dr. Gupta has worked with the rural poor and small-scale farmers and introduced simple, low-cost aquaculture technologies. The innovative techniques he introduced to increase production, known as the “Blue Revolution,” have helped millions of households in Bangladesh and other rural areas. Dr. Gupta called on countries to adopt the Blue Revolution to address the issues of poverty, hunger and malnutrition.

The commentator, the Hon. Ek Nath Dhakal, a Nepalese politician and the director of UPF-Nepal, expressed great pride in the recognition of Dr. Gupta, who is from India, which shares a border with Nepal. He reiterated some of the facts and figures provided by Dr. Gupta, and testified how his aquaculture techniques have contributed to the economic and social empowerment of men and women in poor and rural areas. These works have impacted millions and given them the means to improve their lives. Assemblyman Dhakal said: “When the population is growing so rapidly and there is no clear strategy to produce food, what will be our situation in 2050? Will the world be safer if a billion people are hungry?” He spoke about the correlation between hunger and poverty and lawlessness and misconduct. He pointed out that it was Dr. Sun Myung Moon who was an early pioneer in bringing the world’s attention to the resources available in the oceans. Dr. Moon built factory ships to process fresh fish and make fish powder as a means to feed the world. Assemblyman Dhakal expressed his gratitude to Dr. Gupta for his many practical initiatives which have led to the Blue Revolution. He also publicly thanked UPF Founder Dr. Hak Ja Han Moon for the U.S. $1 million donation that was given to Nepal for the victims of the earthquake (April 25, 2015), that killed more than 9,000 and injured more than 23,000.