The European Union is often criticized by people like me for a wide range of alleged policy and administrative failures regarding human rights.  Today, however, I would like to use this opportunity to attest to the importance of Europe’s role in promoting and protecting human rights, which I can do on the basis of my own experience and reflection. 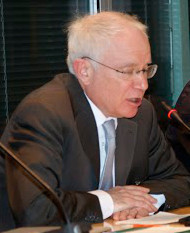 The European Union is often criticized by people like me for a wide range of alleged policy and administrative failures regarding human rights.  Today, however, I would like to use this opportunity to attest to the importance of Europe’s role in promoting and protecting human rights, which I can do on the basis of my own experience and reflection.

First, thank you to the Universal Peace Federation for organizing this meeting.  I have had the pleasure of taking part in other UPF conferences in Tokyo and Geneva.  These meetings bring together people who often do not cross paths.  The UPF can do this because it is a truly independent foundation, not beholden to any official structure or national orientation.  I consider the UPF to be an example of how civil society can raise up important ideas and principles and place them before the eyes of people and governments.

I first came to Brussels in 1991, when I was managing an international project aimed at assisting universities and research institutes in Eastern Europe to reform themselves and strengthen cooperation with their counterparts in the West.  The work was funded by the European Commission—in other words, by the taxpayers of Europe.  One cannot underestimate the positive impact the EU and its members have had on helping countries, which had suffered under the yoke of communism, to become democratic, to begin to establish independent courts, to allow free markets to exist, to humanize institutions like jails and police forces, and to allow a free market of ideas to function.

When we speak about human rights, the EU insisted that if candidate countries wanted to join the EU, they had to meet well-defined criteria as regards the Rule of Law and human rights.  Nothing has worked better to encourage positive change than the leverage afforded by the goal of EU membership, although unfortunately once states have joined the EU, progress has slowed down. You can see the leverage factor working today in states of Southeast Europe.  You can see the positive effects it had when Turkey changed its human rights policies to conform to EU standards, and when the possibility of Turkey’s EU membership seemed to fade, progress also faded.

In order to promote human rights, the EU organized schemes for assisting nongovernmental organizations, which is a wise policy.  Of course I would say that because so much of what I have done, in working with a number of NGOS, was made possible by the European Initiative for Democracy and Human Rights.  People complain that these assistance programs are bureaucratic and so complicated to engage that human rights defenders in difficult countries, many of whom can’t deal with regulations, don’t manage.  But what does anyone realistically expect?  The EU is a hugely complicated formation that has to be accountable.  There is nothing more difficult for a multinational organization, which is accountable to so many governments, to do well, than providing financial assistance to politically sensitive projects.

There is no question that human rights is a pressing concern of the European Union in its bi-lateral dealings with states around the world.  The human rights community always demands that these concerns trump all others including trade relations and security, and this is exactly what they – we -- should be doing.  It is up to those in positions of political responsibility to make the hard decisions, those who have to labor under the burden of what Max Weber called and “ethic of responsibility,” as opposed an ethos guided -- hopefully-- by moral principles.

To take steps to guard the human rights of citizens and residents of European countries, the European Union established a Fundamental Rights Agency some years ago to assist member states abide by their human rights obligations under European Law.   I participated in discussions about the mandate of the institution when it was being formed, which centered around the importance of independence and the ability to be objective and critical.  The mandate needs to be strengthened to make sure the EU cares as much for the rights its own citizens as it does for those outside the EU.

In intergovernmental organizations, representatives of the EU invariably stand up for human rights in their statements.  One can witness this in the Council of Europe, and in the OSCE.  Sometimes these statements are a bit bland, and it has been observed that European voices for human rights have been softened by blending together.  In the United Nations, European states generally speak for themselves, and they usually base their assessments of  human rights conditions in other states on accurate information.  Germany, Greece, Ireland, Sweden and Estonia were just elected to the Human Rights Council.  We need them to stand their ground against the growing pressure to abandon fundamental human rights as demonstrated by the fact that seven unfee, undemocratic, human rights abusing countries were also elected.   I am sorry to observe that the UN human rights system is increasingly problematic. The challenges to protecting fundamental rights and liberties are stronger, and more menacing today than they have been for 20 years. We need members of the European Parliament to make European human rights policy tougher, and to keep it focused on civil society.

I want conclude with some observations about European human rights policy in relation to the citizens of Europe.  One of the most serious challenges facing the European Union is to ensure that its policies reflect democratic choices by the citizens, in whose name they are executed.  When the EU imposes harsh sanctions on Iran, in part for its egregious violations of human rights, it does so in the name of the people of Europe.  The EU should make this clear to the government of Iran.  When the EU spends taxpayers’ money on helping people in places like Russia or Belarus in their struggle for human rights, European citizens need to know this, and Russians and Belarusans need to know it, too.    I hope EU authorities will denounce threats to freedom in Egypt as the speaker of the EU Parliament has done, and they should do so clearly in the name of the citizens of Europe.  When the EU negotiates with a government like the one in Turkmenistan, the EU needs to say that European citizens, to whom it is accountable, will not tolerate normal relations with a dictatorial government.  Europe’s human rights policies will be more effective, and will carry more weight around the world, when they are better known, and more clearly endorsed, but the people of Europe.